The history of trampolining

Webmaster note: Not all the pictures are from Rob’s work.

It has been said that the first type of trampolining was done by the Eskimos who used to toss each other up into the air on a Walrus skin something like the sheet used by firemen to catch people jumping out of the windows of houses which were on fire. In Anchorage airport, Alaska, there are postcards depicting the Eskimos being tossed up in a Walrus skin. 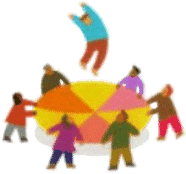 There also is some evidence of people in England being tossed up into the air by a number of people holding a blanket. These may or may not be the true origins of the sport of trampolining but it is certain that in the early years of the 20th century there were stage acts which used a “bouncing bed” on the stage to amuse audiences. The bouncing bed was in reality a form of small trampoline covered by bedclothes on which the acrobats performed mostly comedy routines.

The trampoline itself, according to circus lore, was first developed by an artist called Du Trampolin who saw the possibility of using the trapeze safety net as a form of propulsion and landing device and experimented with different systems of suspension, eventually reducing the net to a practical size for separate performance.

In the early 1930s, one George Nissen made a trampoline in his garage and used it to help with his diving and tumbling activities. He then felt that he could entertain audiences and also let them participate in his demonstrations. Thus were the beginnings of a new sport.

During World War 2, the United States Navy Flight School developed the use of the trampoline in its training of pilots and navigators, giving them concentrated practice in orientation such as had never been possible before. After the war, the development of the Space Flight programme again brought the trampoline into use to help train both American and Soviet Astronauts, giving them experience of variable body positions in flight.

The nature of the activity is natural, easy and rhythmical, and the power of the bed enables participants to have fun and excitement by jumping higher than they would normally be able and to perform many skills landing on the feet, seat, front and back and also to take off from those varied landing positions.

In the USA it was quickly realised by the Physical Educators that the trampoline had something new to offer by observation of the physical benefits which trampolining had produced during the war years and also the enthusiasm of those who participated, and trampolining was introduced into school physical education programmes.

There were of course the detractors who felt that the activity was dangerous and reduced the strength of the legs because the springs assisted the jumping. However, the threshold of skill is low so that almost anyone of any age can get on and do something which is fun, exhilarating, aerobically effective, and caters for the highest level of skill and daring which some are capable of. It is particularly popular amongst the very young, who now have something better than their parents’ double bed to jump upon; although many parents complain that the kids jump even more on their beds to try to reproduce the fun they have in the gym. It is also a form of plyometrics – the latest form of strength training.

The first competitions were held in colleges and schools in the USA and then in Europe, with the first World Championships being held in London in 1964. Kurt Baechler of Switzerland and Ted Blake of England were the European pioneers and the first ever televised National Championships were in England in 1958.

Soon after the first World Championships, the inaugural meeting of prominent trampolinists was held in Frankfurt to explore the formation of an International Trampoline Federation. In 1965 in Twickenham, the Federation was formally recognised as the International Governing Body for the sport. By 1969 the first European Championship was held in Paris and Paul Luxon of London was the winner at the age of 18. The ladies winner was Ute Czech from Germany. From that time onwards, European and World Championships have taken place in alternate years – the European in the odd and the World in the even.

At first the Americans dominated the World Championships, but due to many law suits over trampolining, less was allowed in educational institutions and the high level of performance of the Americans went down. The Europeans gradually began to dominate the sport and in recent years athletes from the former Soviet Union have almost completely dominated the sport. Germany, France have been the other strong nations in trampolining and the first four ranking places in World Trampolining would go to USSR, France, Britain and Germany. Although in most countries trampolining started about the same time in the fifties and sixties, some countries have not been able to develop as strongly as the major European countries.